The one thing that we can all agree on as a highlight of any Alexander Wang moment is the expression of Joy as his final bow. With something more than Fashion to celebrate for his own new June/December show schedule, we could honestly feel his enlightened energy. Re-uniting both of his parents for this new highlight titled ‘Collection 1’ shared a deeper sentimental value with this being his father’s first time seeing his Runway show in person.

At the helms of the World being shackled to uncomfortable Immigration reform, Wang took it upon hisself with this runway show to touch on the topic in a rather exciting way. With two parents that migrated to America in 1973 this moment was more personal than political in the sense of statement. Although his parents separated more than 20 years ago, Wang brought the two of them together once before yesterday evenings runway show for a road trip through the Californias where he asked about their immigration story – sparking the new movement we titled “Immigrant Americana.” The soul-seeking moment of learning of the struggles his parents endured of moving to a new country not knowing a spick of English, taking low-level jobs, grocery shopping and only able to look at pictures and guessing clearly awoke a new element in Alexander. Taking those histories and intertwining it with things he enjoyed growing up like pop culture, American football, the culture Harley Davidson and the motorcycle, and rock ’n’ roll music he created a proverbial collection including headlight references like motocross gear, AXL bandanas, football jerseys, sexy deconstructed football jersey dresses, street style worthy biker shorts, studded leather jackets, and not to mention the striped star face paint and complimenting face masks.

The intense finale was slated on the backdrop of Childish Gambino’s “This Is America,” – which completely aligns the views of Alexander Wang. Cleanly held on-theme of the rooftop at the South Street Seaport – Note cards on every seat read: “Today marks a new beginning, a new identity, and a new day for my brand.” 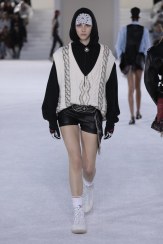 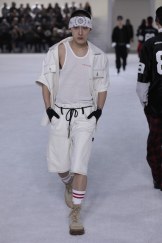 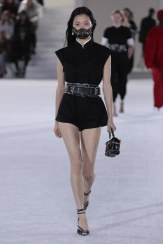 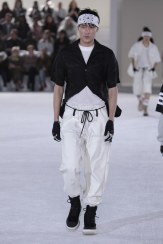 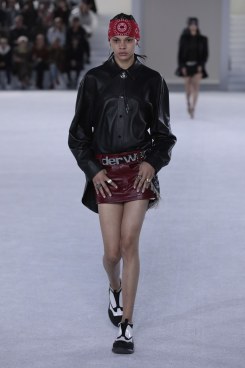 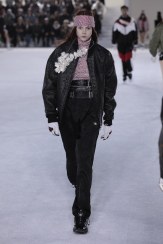 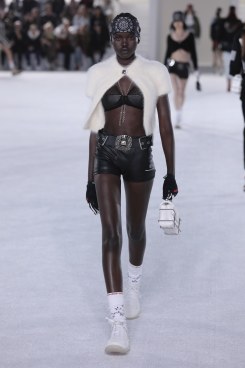