Pins and needles aren’t something anyone likes to wait on, but The Carters are masters of delivery! Yesterday we were graced with a joint album by Beyonce & Jay-Z in the midst of the European leg of their OTR II tour. As if that wasn’t enough, they released the visual, which curates the entire Culture of the Album, APESHIT.

With some music videos lately displaying the lack of feeling music is appropriated in providing – this is not the case. The vibe was set at the historical Louvre museum surrounded by referential pieces that are imperative to cultural problems in society today. Surrounded by original arts of legendary craftsmanship, including the The Coronation of Napoleon, Mona Lisa, and Venus de Milo.

The entire production is a visual aid to African-American greatness. Taking pieces from centuries ago, and creating a moment of reference to original creators in everything that is to date. Political issues are best addressed in the manner in which they’re not presented. As loud as a mouth is, Art is amplitude.

The Fashion is very forward and alive in the video and a breakdown from beginning to end is necessary:

The scene open with a whimsical tour through the museum in an after hour lighting moment that displays the true architecture and delight in the moments to come. With the women power suit taking such a stride in the moment, we’ve never seen the debut in such a magnified way. Here we have powerful woman in business and entertainment, and industry consumed with the unjust demean of women in power standing adjacent, and equally, next to her partner in life and business with just as much power. Both wearing suits and in admiration of power and awe of each other. Creating a standing moment allowing success. A suit, but still yet so feminine and tranquil, Beyonce dawned a Red-Lined light purple suit by Peter Pilotto. Complimenting in seasoned tones of bright hues, Jay Z stands in secure solidarity in a pastel green Dries van Noten suit. No Tie, No Button down, no casualty to it – just a big gold chain. Now thats APESHIT! 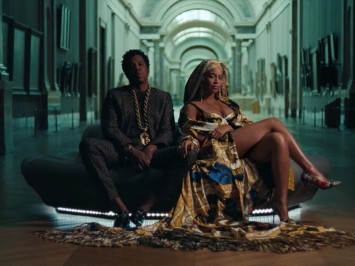 In another balance of love and equality, the power couple shows a separate side of appreciation in one another. In a hall emptied and accompanied by legends longed  adorned – Beyonce is covered in a decadent royal African ensemble by Versace. The full over classic victorian print is draped over a custom body suit, cover-up, and head wrap. 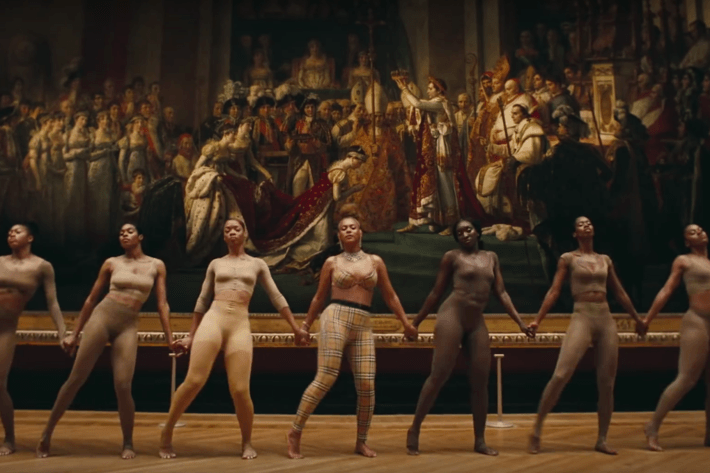 Social Medias favorite scene comes at no surprise. Moving in front of the Coronation of Napoleon – Beyonce and her dancers eloquently moved their bodies in correlating two pieces. The ladies are bound in beautiful flesh toned spandex – while beyonce is in a bralette and matching high-waist leggings by Burberry.

(from left to right) Cloding the video next to the legendary Great Sphinx of Tanis – Beyonce and Jay stood strong against the red lighting of passionate rage. Beyonce in in the MCM x Misa Hylton capsule collection and Y-project boots. Jay-Z wearing full Alexander McQueen. In trench coats impeccably lined against each other – the scene transferred to Bey literally going APESHIT in a custom pearl dipped Balmain Resort 2019 piece and finishing with Jay-Z in a hologram print Resort 2019 Gucci and even a silk John Galliano iridescent blush pink suit with a black back collared lapel.

Styled by two different generation favorites, Zerina Akers and June Ambrose showcased the talent and merging of icons. June has been an icon for the industry setting moments and creating trends for years to come with her legendary work with Jay-Z and colleagues alike in their early careers. The display of Fashion Engineering is more than inspirational and to be talked about, it’s a vigorous showcase of Love, Equality, and relentless dedication to Acceptance on more aspects of race – but within the home as well. A positive effort the world so desirably needs at this critical moment.

Everything Is Love is available now on Tidal, iTunes, and limited on Spotify.